31 years ago at exactly that time today, one of the most horrifying accidents in human history occurred at the Chernobyl Nuclear Power Plant in Ukraine. A couple of weeks ago, a few members of the UNYANET Alumni Board (Daniel, Halstein and Michael) did a field trip to the Chernobyl Exclusion Zone, to find out more about what happened there. This article is a short reminder about the incident and will also explain to you, what it’s like to be in the Chernobyl area, what you can expect there and how you can go there yourself. 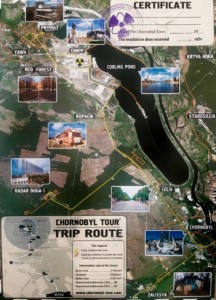 Since it’s a bit hard to imagine without a map, you can see here a map on the participation certificate of the tour operator Chornobyl Tour which we used for our trip there. The map shows the Ukrainian part of the area: the town of Chernobyl, which gave the power plant it’s name. The town of Pripyat, which was built for the plant-workers and their families just next to it. You can also see some other smaller towns and also an old soviet military base with the radar Duga 1.

Well, in short a safety test late at night / early morning on April 26, 1986 went horribly wrong and caused the core of reactor #4 to explode and release radioactive isotopes into the atmosphere. In the aftermath of that, the town of Pripyat and later a 30km zone around the reactor became uninhabitable. There are different quotes about the human toll of the accident and a lot of it is only a rough estimation due to the indirect toll of radiation but there were about 56 direct deaths with about 4000 indirect ones due to cancer. In total it is estimated that a number as high as 600.000 people received higher doses of radiation.You can read more about the accident itself at the homepage of the World Nuclear Association.

Isn’t the radiation too high to visit the zone?

This is the most common question we got from our friends. In short: no. But there’s always a “but”. Radiation is everywhere. The examples given here are taken from the “Radiation Dose Chart”. If you eat a banana you’ll receive a dose of 0,0001 milli Sieverts (mSv) or 0,1 micro Sieverts (µSv). The normal annual dose humans receive from natural sources and medical scans is about 4 mSv. The geiger counter we had with us all the time showed, that during this one day trip we received 2 µSv which is ten times lower than a chest-x-ray. The “but” within the Chernobyl zone is: there are still highly contaminated areas with radioactive dust. The most important factor when handling radiation is: time. If you inhale a radioactive dust-particle, it will stay inside you and you’ll continue to receive the radiation as long as it remains in your body. As long as you stay on the usual tour-tracks however, there shouldn’t be any danger of encountering radioactive dust, which is mostly contained in sealed cellars of buildings.

The Tour to Chernobyl Exclusion Zone

In order to get on that tour, we booked it in advance. We choose the tour operator Chornobyl Tour, which charges about 130$ per person for a one day guided group tour (which on a personal note is worth every penny).

First you have to get to Kiew. It’s best to arrive the evening before or earlier because the tour starts in the morning (closely to the train station). Don’t forget your Passport as you need it to enter the Exclusion Zone (… Halstein). The tour will stop at a gas station to shop for some water and snacks, which you’ll need during the tour. After some introduction videos on the bus and a 2,5 hour drive, you’ll enter the Exclusion Zone via military checkpoint. The zone has 3 checkpoints: at 30km, which is the beginning of the zone and contains among other towns also the town of Chernobyl. Resettlers live in that area and the administration of the zone is also based there. At 10km to the plant, there’s another checkpoint. It’s safe to work there but radiation is too high to live here. A lot of people work here to dismantle the radioactive material and get it to end-storage. The town of Pripyat has another checkpoint.

In order for you to get the full picture, we choose to show you all the pictures we’ve taken in order to relive the tour, as well as a video we produced. In case you want to use any of our copyrighted pictures, please send us a request at info@unyanetalumni.org