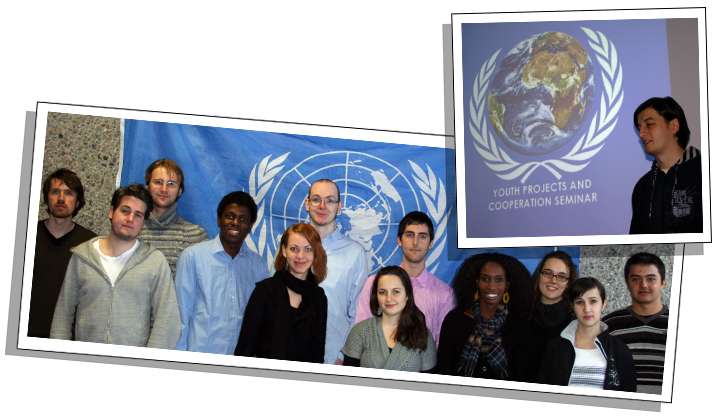 Three UNYANET Alumni members, who have been involved with the development of UNYANET from the very beginning, reflect on the last five years since the first preparatory meeting in Oslo in November 2010.

On a cold November, 15 people from 10 different countries travelled to Norway to start a new youth organization. Oslo was showing itself from the best side, with -10 degrees and a snowstorm. The organizer from Oslo tried without much success to convince the other participants that this was in fact not normal. The small Nordic capital is usually a dark rainy place this time of year.

This was the UNSA – Norway’s first international event, and a lot of planning had gone into organizing and accommodating all the participants. Oslo is an expensive country, and a lot of effort went into keeping the costs low. The organizers tried as much as possible to accommodate the participants into the cozy Norwegian apartments, rather than budget hotels. (Someone drew the shortest straw on this one!)

Once the participants’ cold throats warmed up from the radiators at the University, the participants suddenly turned into a friendly, engaged, and talkative group, much helped by some homemade “Norwegian” food. Norway has not really been famous for its food, and the most common Norwegian dish is a Norwegian style frozen pizza called “Grandiosa”.

After some speedy creative workshops, the whole group was engaged with establishing new exiting projects, that we as a group could work with together in the future. In addition to all the amazing work we did, one of the highlights for the first day was the “Global Village” where everyone brought food and drinks from their own country.

As most of the participants weren’t too excited about walking around in Oslo in the snowstorm, the nights was spent in the hosts apartment, close to the centre of Oslo, where everyone could enjoy some local brew in front of the fireplace. Someone kept arguing that they should all come back in the spring, when Oslo “turns into a green paradise”.

The next we could see a lot of the projects coming to life, and everyone realised we had just not had enough time together! And after long ours of organizing UNYANET was established. This way we could continue the great work of everyone there, and recruit new wonderful people into the organization.

On the last day we were very sad to see each other go, but new for a certainty that it would not be the last time we got together. All tough one of the representatives from Austria really missed the warm “ Foehn wind” of home. And we had all decided to meet again in Vienna the year after.

Thank you everyone for 5 great years.

The thought that gave birth to UNYANET is five years old. Back then we had the idea to bring together UN-Youth from many countries to cooperate on international projects, so we choose to invite all organizations we knew back then to a meeting. It was a cold November week in most parts of Europe, so we wanted to meet in a place where it’s warm and comfortable, which is how we ended up in Oslo, Norway. Surprisingly when I think about it today, the meeting which took place in the midst of -20 degrees and a snowstorm really warms my heart. It represents everything we fought for and it represents a common truth: we are young people who want to do something, we want to help make the world a better place and we do it no matter how bad the weather is, no matter how strong the wind blows against us.

This meeting was not only the first of its kind that lead to the establishment of UNYANET, it also led to friendship among the participants. A friendship that today still lives on. There was Pau from Spain, who was enthusiastic about just anything; that crazy dude from Norway – Halstein – who was absolutely not freezing in that weather; Honna from Finland who voluntarily stepped outside with me to have a cigarette… all the time; there also was Daniel from Switzerland with all his crazy meeting methods and group games (and they worked..); and of course many other inspiring people (sorry if I don’t mention everybody). The meeting in Oslo was the seed for all those friendships and that seed, much like the idea grew over time.

How we did it.

So we had the idea and we had the people, but what next? Much like the described seed that continued to grow, we knew that we cannot just establish an international organization. We started working on random project ideas and tried to later carry out the ideas with the most support. The important part here is, that the seed that got established during that meeting was put in a pot at first. We established our own rules and our own structure bottom-up – you just cannot throw a seed into the snowstorm and hope it’ll grow. That plant was groomed until Vienna and then planted into the wild. Today that small meeting with a bunch of young people somewhere in the north turned into a strong tree that connects thousands of young people.

I had been appointed the External Relations Officer at the UN Youth Finland that year. The Presidency of UN Youth Finland presented us an email from some dudes called Daniel and Michael asking if we want to send a participant to a youth seminar in Oslo. What? Something happens within a two-hour flight radius from Finland? Of course I wanted to go.

When I think about us five years ago, I would like to say that we were just a bunch of misfits trying to figure out how to participate in shaping the world we live in. But that would be wrong. We have actually been all serious right from the start. It now seems that, all along, we have been quite aware of what we want and how we want it done. That is greatly thanks to Daniel and Michael who took us onboard their vision, its formation and execution.

We have failed and learned, we have lost inspiration and motivation, and we have sworn we quit all organization work. We have also worked hard, succeeded and taken pride, we have made friends and laughed, and we have become more inspired and determinate than ever. I want to believe that we have created something significant, but when it comes to youth empowerment, the work is nowhere near finished. Long live UNYANET and UN Youth around the world!